The One Future Campaign has published analysis that finds the three parties leading in the opinion polls have the weakest and vaguest promises on climate action in their manifestos. The campaign - backed by dozens of local and national groups from the women's, youth, faith, environmental and overseas aid sectors - asked three independent climate policy experts to score the manifestos against One Future's nine policy demands, which include climate targets based on science, investment in public transport and warmer homes, no new fossil fuel projects, a just transition deal for peat and coal workers, and support for farmers to reduce pollution.

The seven party manifestos were assessed by Professor John Sweeney, Dr Cara Augustenbog, and Sadhbh O'Neill who was one of the policy advisers to the members of the special all-party Oireachtas Committee on climate action last year.

The three scores were combined to give marks out of 100. The overall scores are as follows:

Commenting, Oisín Coghlan, Co-Convenor of the One Future Campaign, who commissioned the independent analysis said:

"This independent analysis of the manifestos shows that no party is yet planning to do enough to prevent climate breakdown, and we need every party in the next Dáil to be committed to faster and fairer climate action. There's still time for that to happen before election day which is why we are calling on all election candidates to pledge to support One Future's nine policy proposals if elected."

Dr Cara Augustenborg, who previously scored the manifestos at the 2016 General Election, commented:

"While all the parties have improved their policies on climate and biodiversity since the last general election, it's disappointing the larger parties still don't seem to connect the dots.
They are promising more climate action on the one hand, while at the same time promising more regional airports, for example, and not committing to the level of emissions reductions we need to help solve the problem. In an effort to promise something for everyone in the audience, they seem to have lost sight that the climate crisis is the biggest challenge humanity faces."

"The various manifestos indicate an encouraging awareness of the seriousness and scope of the climate change challenge facing Ireland. The political parties recognise the concerns of the electorate and their responsibilities as legislators to a degree not apparent in previous elections, and this is to be welcomed. Several progressive policies are described, and commitments to achieve agreed targets are liberally scattered throughout the manifestos.

"However, the hard choices necessary to implement the aspirations are less in evidence. Ultimately, radical emission cuts by all sectors of society and of businesses will be necessary in the short and medium terms to tackle effectively the climate and biodiversity emergency. No muddying of the water or excuses for any sector will gain currency with what is an increasingly informed electorate concerned for their future well being and that of their children."

The analysis comes as a poll for the Times Ireland showed that the environment is the fourth most influential issue for voters, behind health, housing and the cost of living, but a little ahead of pensions, the economy, tax and crime. After much criticism of how the climate issue was framed in the first two Leaders' Debates with Pat Kenny and Claire Byrne, tonight's Claire Byrne Live is dedicated to a discussion of the climate challenge the next Dáil faces.

1. More information is available on the One Future website at https://www.onefuture.ie/manifestos/

2. The analysis was done by:

3. The overall manifesto scores and breakdown is as follows: 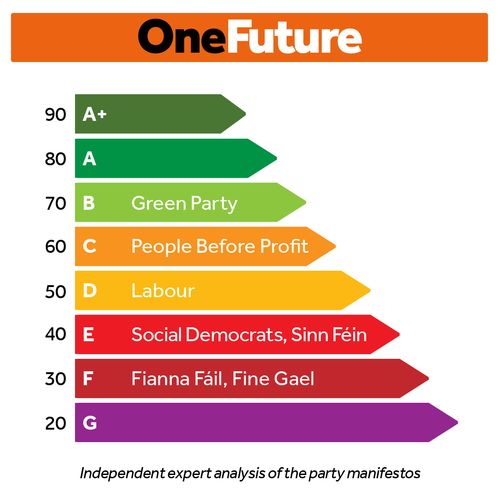 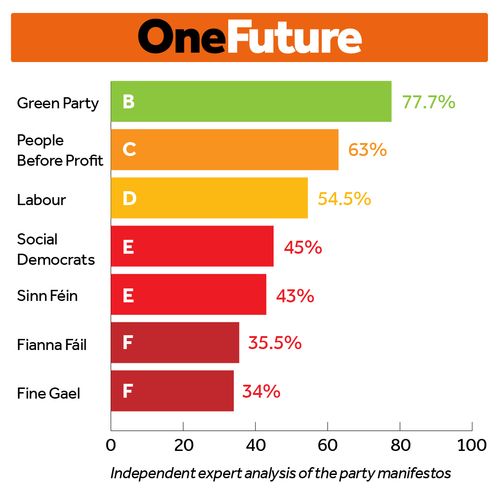